Tenerife is one of the best places in the world for whale and dolphin watching. 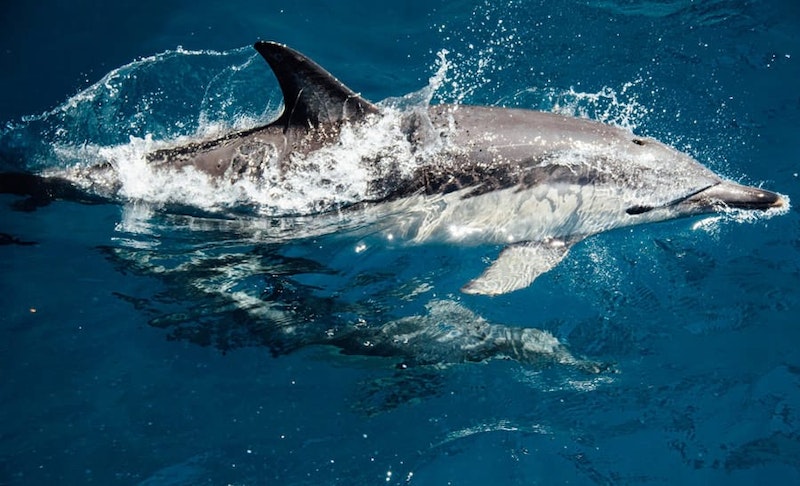 Tenerife is one of the best places in the world for whale and dolphin watching. The glorious year-round climate which attracts so many visitors to the island each year also entices plenty of marine mammals, with around 21 species of whales and dolphins swimming through the channel in between La Gomera and Tenerife each year.

Head down to Puerto Colon, Tenerife and you’ll be overwhelmed with the number of places offering dolphin watching excursions. And with so many available, picking the right one can feel almost impossible. To help you make the best choice for you and have a fantastic experience at the same time, here’s why Tenerife.Fun offers the very best Tenerife dolphin boat trip on the island. 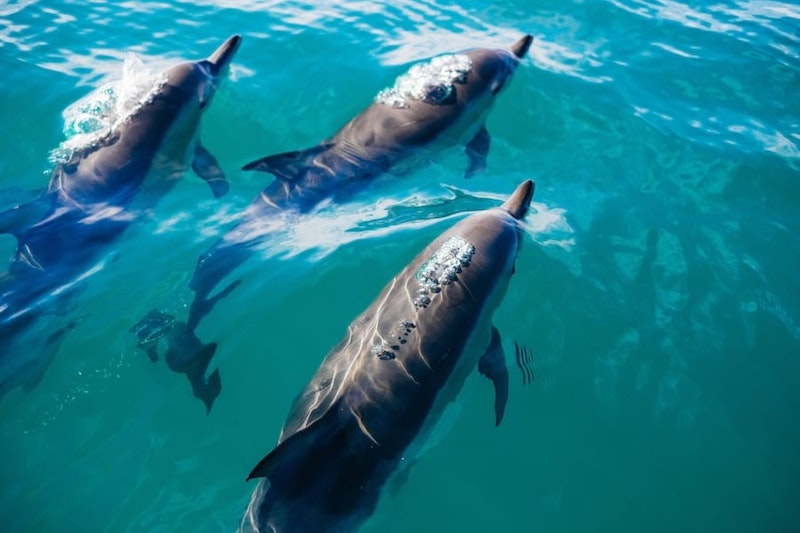 Our luxury yacht invites you to enjoy your Tenerife dolphin trip surrounded by pure opulence. The top deck of the boat features plush sunbeds where you can relax and feel the warm Canarian sunshine tan your skin while the captain points out the dolphins and other points of interest nearby. Also on the same level you’ll find a solid wood dining table where you can enjoy your food and drinks al fresco with some of the best views in Tenerife. If the sun gets a bit too much for you, there’s the shady under-cover bottom deck complete with comfy lounge and full kitchen where you can chill out and unwind while watching TV or just enjoying the sensation of being at sea.

Check out our 6-hour Whale and Dolphin Watching Tour that takes you to the Los Gigantes. Click here for details and booking.

Many boats offering dolphin watching in Tenerife are very large vessels which cram as many people as possible on board. This means the boat is really noisy and you can’t get very close to the dolphins. Our Tenerife dolphin boat trip sails with a maximum of 10 guests and 2 crew, so everyone has got plenty of room to spread out. Plus, the comparatively smaller size of our boat means we can get really close to the marine life and see them like never before.

You won’t find any crew friendlier than the one on Amaro Pargo, a Bavaria 49! Each member speaks really good English and is incredibly passionate about what they do. Elias the captain will fill your dolphin tour in Tenerife with pure wonder, pointing out all the graceful dolphins along the way and enlightening you with facts about the Canary Islands you’ve never even heard of. Maria the sales and reservation manager oozes charm and will happily go out of her way to make sure you have a truly memorable experience and help you make any special events extra special. Finally, Hennadii the driver and onboard server is a real people person and will have you smiling from the moment he picks you up at your hotel to the minute you return.

Before booking your whale and dolphin watching tip, check out our Guide on Whale Watching in Tenerife. It is the best feeling when you spot a marine creature you can immediately identify. 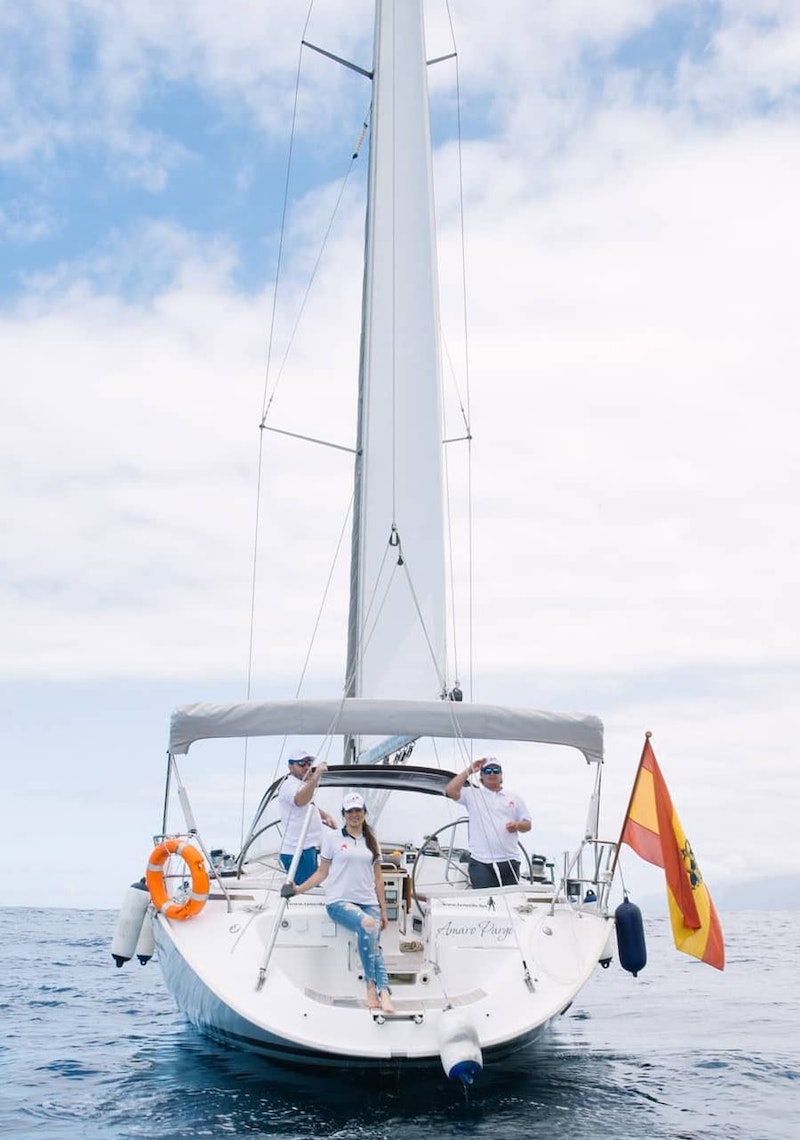 Our friendly crew will make sure you have an amazing experience

Thanks to our free transfer service, you don’t have to worry about getting from your hotel to Puerto Colon, Tenerife. Wherever you are in the island, we’ll pick you up and drop you off for free! The complimentary pick-up service is offered on all our tours and is just a small part of providing you with the best experience imaginable.

Taking care of marine life is one of our top priorities, which is why our yacht has been awarded a Barco Azul (Blue Boat) flag. This flag means we’re fully licensed to operate dolphin tours in Tenerife and understand the rules of how to protect sea life, such as how close we can get up to them and how to behave so they don’t become stressed. Even though the Barco Azul flag is obligatory for all boats offering Tenerife dolphin trips, only a few have them. When choosing an excursion, it’s very important for the wellness of the local wildlife to choose a company that has gone to the efforts of obtaining a Barco Azul flag.

We don’t want you to go hungry onboard, which is why we supply you with delicious food and free-flowing drinks while dolphin watching in Tenerife. The type of food you can indulge in differs according to which trip you choose, but it’s all freshly made and top quality. To complement the food, there’s a wide selection of drinks available, including water, soft drinks, beers, wines and champagne. 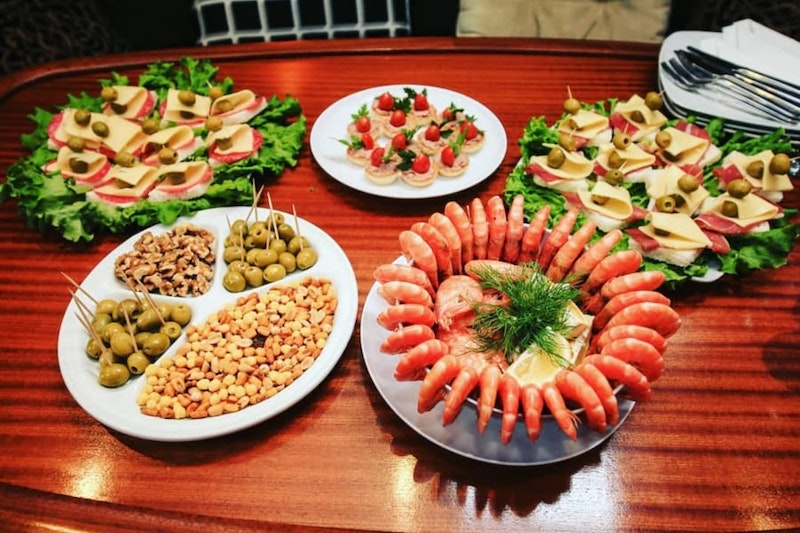 We provide gourmet food and drinks during your boat trip

What you’ll see on a Tenerife dolphin boat trip

Although dolphin sightings are never guaranteed on our trips, there’s a very high chance you’ll see them when you sail with us. The most common species you’ll see when dolphin watching in Tenerife are the common dolphin, bottlenose dolphin and spotted dolphin. These dolphins are incredibly intelligent, playful creatures and it’s common to see them playing at the front of the boat, racing and leaping around before it.

As well as the dolphins, you’ll also have the chance to see plenty of other marine life in the waters around Tenerife. Pilot whales gracefully gliding through the ocean, fly fish jumping out of the waves and turtles bobbing up to the water’s surface for air are just some of the incredible sights you can expect to see on a dolphin tour in Tenerife. Our captain has even seen a hammerhead shark once! 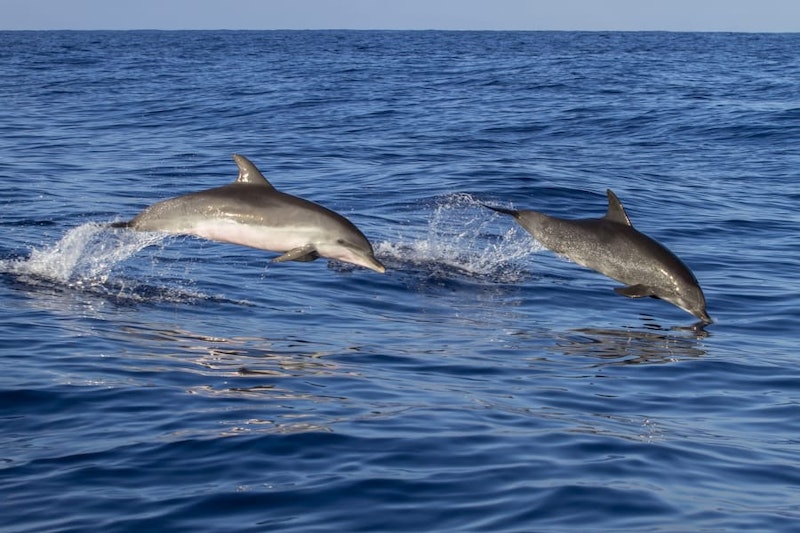 Our yacht can get really close to the dolphins and you’ll get some amazing pictures and videos of them if you take your camera or camera phone.

With the cool sea air blowing against your skin, it’s easy to think the sun isn’t as hot as it is and get sunburnt. Do yourself a favour and slap on the suntan lotion – even if it’s cloudy!

Be quiet around the marine life

Loud noises can easily scare whales and dolphins and make them swim away. So when the captain points out some sea life close by, be quiet so they don’t swim off.

All our trips include a chance to swim and snorkel. There’s nothing like plunging into the refreshing waters around Tenerife. So make sure you’ve got your kit with you!

Four very different and distinct geographical areas typical of Tenerife, that should not be missed on this very comprehensive tour.

Go way back in time, see the original traditions