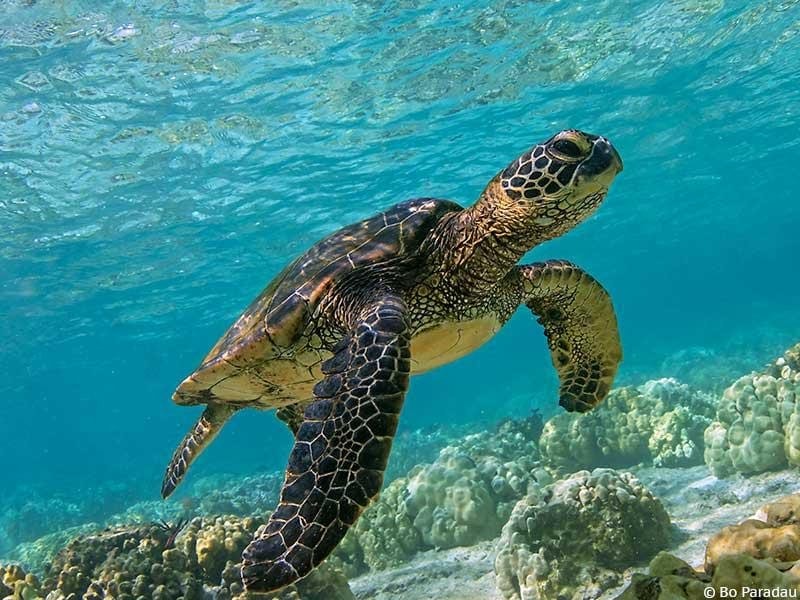 Wonderfully warm waters year-round, remarkably high visibility and a vibrant marine ecosystem make Tenerife an amazing place for snorkeling. Although the stunning volcanic formations and colourful subtropical fish which hide beneath the water’s surface are fascinating to see, one of the best bits about snorkeling in Tenerife is that there’s a good chance you’ll spot turtles.

If you want to get up close and personal with the beautiful marine reptiles which call the waters around the island home, here’s everything you need to know about snorkeling with turtles in Tenerife.

Check out our guide to Costa Adeje beaches. 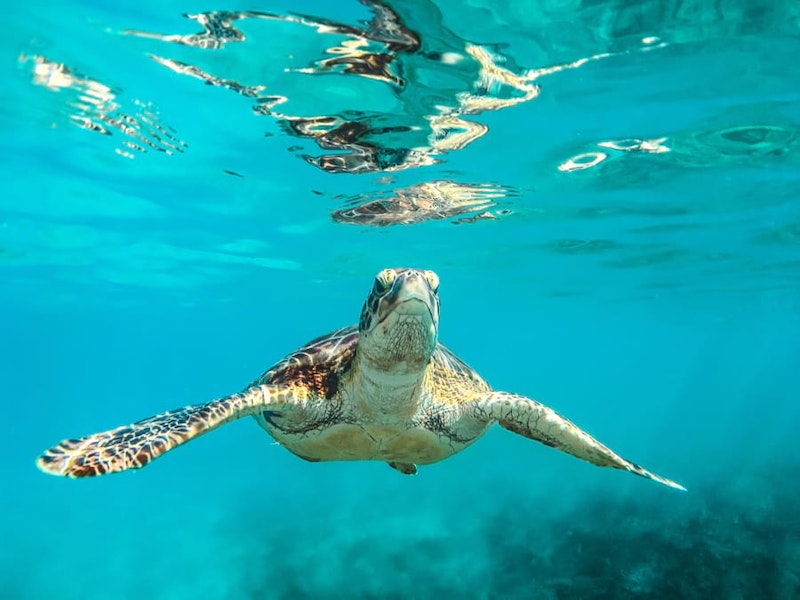 Did you know you can go swimming with turtles in Tenerife?

Where’s the best place for snorkeling with turtles in Tenerife?

There’s one place on the island where you’re practically guaranteed to find turtles – El Puertito in Armeñime, Costa Adeje. This secluded bay is made up of a small crescent-shaped beach just a few kilometres away from from the big holiday resorts in the west of the island. Despite being so close to the holiday resorts, El Puertito has got a really local, bohemian vibe you’ll instantly fall in love with.

This bay is protected from strong waves, making it ideal for everyone to have a go at snorkeling – including young children and people who aren’t overly confident swimmers. Plus, the high quality of the water and the crystal clear appearance mean you’ll easily be able to spot the turtles and plenty of other marine life.

Because the beach is so small, especially when the tide’s in, it can get very crowded – even if you go in the early morning. That’s why we suggest joining one of our boat tours from Puerto Colon in Tenerife instead. This way you’ll have plenty of room to sunbathe on the boat and not have to worry about finding a spot for your towel on a packed beach.

Which types of turtles live around Tenerife?

The loggerhead turtles in the Canaries weigh around 135kg and can be anywhere between 70cm and 1m long. They got their unusual name because they’ve got particularly large heads with strong, heavy jaws. This, combined with their reddish-brown heart-shaped shells, makes them really easy to spot. Their front flippers have 2 claws and the rear flippers have 2 or 3 claws, which help them dig into the sand to hide their eggs and fight off predators.

Loggerhead turtles thrive in warm, shallow waters throughout the Atlantic, Pacific and Indian Oceans. Especially where there’s plenty of shellfish, crabs, mussels and clams for them to eat, like in El Puertito. There’s no cutlery in the sea but loggerhead turtles don’t need it – their jaws are strong enough to crush shellfish in their shells without any difficulties.

Although loggerhead turtles live in the waters around the Canary Islands, they return to the locations they were born (North Africa, Cuba and Mexico) to breed, before coming back to the Canaries afterward. 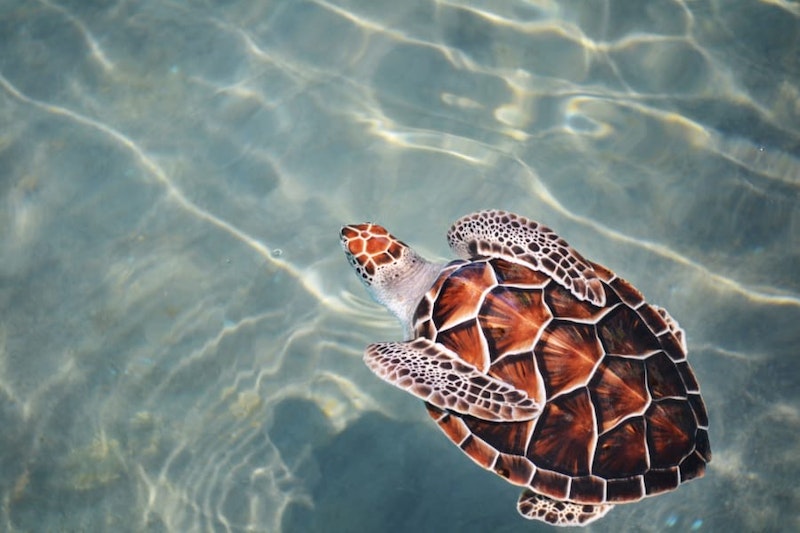 Many loggerhead turtles live in the sea at El Puertito

Green turtles also pay El Puertito a visit quite often because they love tropical and subtropical waters. This species stops by our islands while they’re migrating between their favourite feeding grounds and the beaches where they were hatched to breed themselves.

Green turtles can measure anywhere between 90cm and 2.7m, making them one of the largest sea turtle species. Despite their large size, green turtles are the only sea turtle herbivore and happily graze on seagrass and algae which helps keep the seabed and the creatures which live within it healthy.

This species’ flattened body is protected by a large, teardrop-shaped shell which is a light olive shade in the Canaries. Most green turtle shells are this colour, with the exception of certain populations in the eastern Pacific Ocean which have almost black shells. Surprisingly, green turtles got their name because of the green colour of their fat and cartilage – not the colour of their shells. Their large paddle-like flippers help them glide through the water with ease.

Save with this award-winning, low-cost airline on your flight to Tenerife! 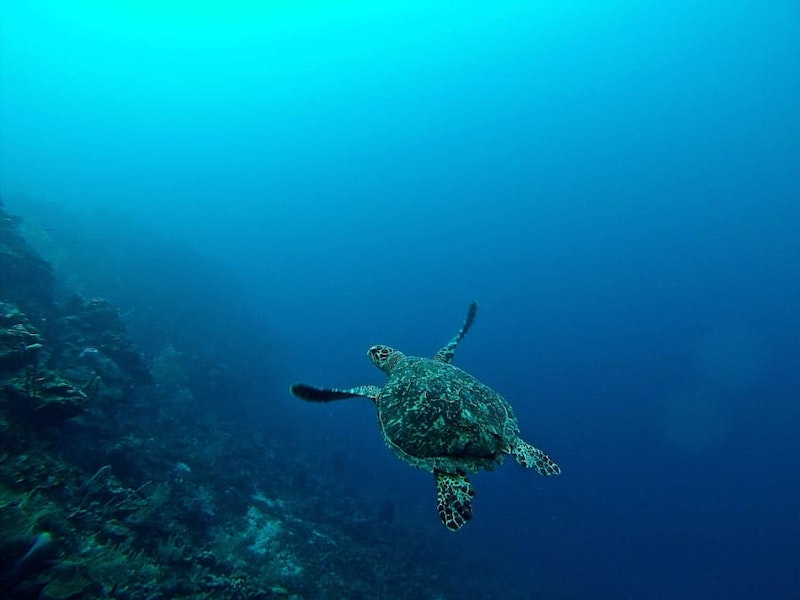 When’s the best time for snorkeling with turtles in Tenerife?

Loggerhead turtles live in the waters around Tenerife during the summer months (June-September) when the water is warmest. During this time, you’re very likely to spot this species close to the coast and sometimes even on the beach. Early in the morning, el Puertito is teeming with divers snorkeling with turtles in Tenerife. But our boat trips are timed so we visit the bay when it’s a little quieter and you’ll have more space to swim with the majestic creatures. 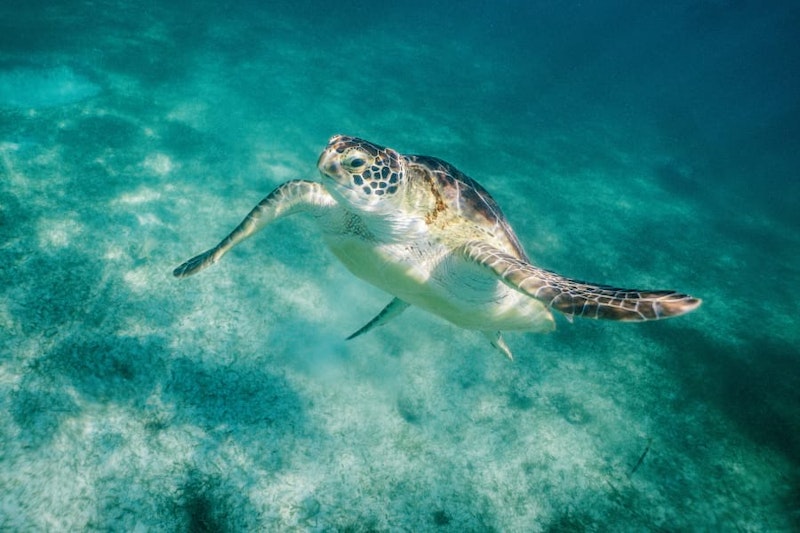 We offer three different boat trips in Tenerife and one of them includes a stop at El Puertito in Armeñime for snorkeling with turtles. The other two include stopping at Los Cristianos and on the path to Los Gigantes, where it is possible to spot turtles. We provide you with a mask and snorkel so you don’t need to bring your own and we’ve even got pool noodles, so you can spend less time worrying about staying afloat and more time admiring the turtles.

While you’re enjoying a refreshing swim, our captain and crew will be on the lookout for turtles and point you in the right direction so you can enjoy the once-in-a-lifetime experience of swimming with them. Our captain has got more than 3,500 miles of sailing know-how and is an expert pointing out local marine life.

After you’ve had your fun snorkeling with turtles in Tenerife, you can get back on our luxury yacht for a spot of sunbathing, a glass of bubbly champagne and a bite to eat before heading back to Puerto Colon and enjoying the gorgeous volcanic landscape that Tenerife has to offer. Choose your itinerary around the shores of Costa Adeje with our private boat hire.

Four very different and distinct geographical areas typical of Tenerife, that should not be missed on this very comprehensive tour.

This excursion gives memories never to be forgotten.

Go way back in time, see the original traditions